John Younger sealed a record fourth Field & Game National Championship in a shoot-off but history told him it might not be his day.

After finishing his last round another competitor stepped up to shake his hand and offer congratulations but John knew it was premature.

“Some years ago at Shepparton the same thing happened and the bloke congratulating me said Brenton Irons wouldn’t shoot 25 in his last round to force a shoot-off; he did shoot 25 and then smoked me.”

Brenton shot a possible on ground six, statistically the toughest ground, to end the first day in good shape.

Sunday didn’t start as well: he dropped five targets on ground one and needed 25/25 on ground two to force a shoot-off.

The shooter who shook John’s hand this day also suggested Brenton wouldn’t do it. He did and John immediately thought history was about to repeat.

Mind you, he thought he’d blown his chances long before.

“It was a slow start on layout six but I wasn’t really disappointed because of how that layout was. I thought if I could have shot 22 there I’d be happy, and I came in with 21,” he said.

“It was a testing course and a couple of the young lads, Brenton and Billy Cain, shot 25 there, which was absolutely brilliant shooting.” 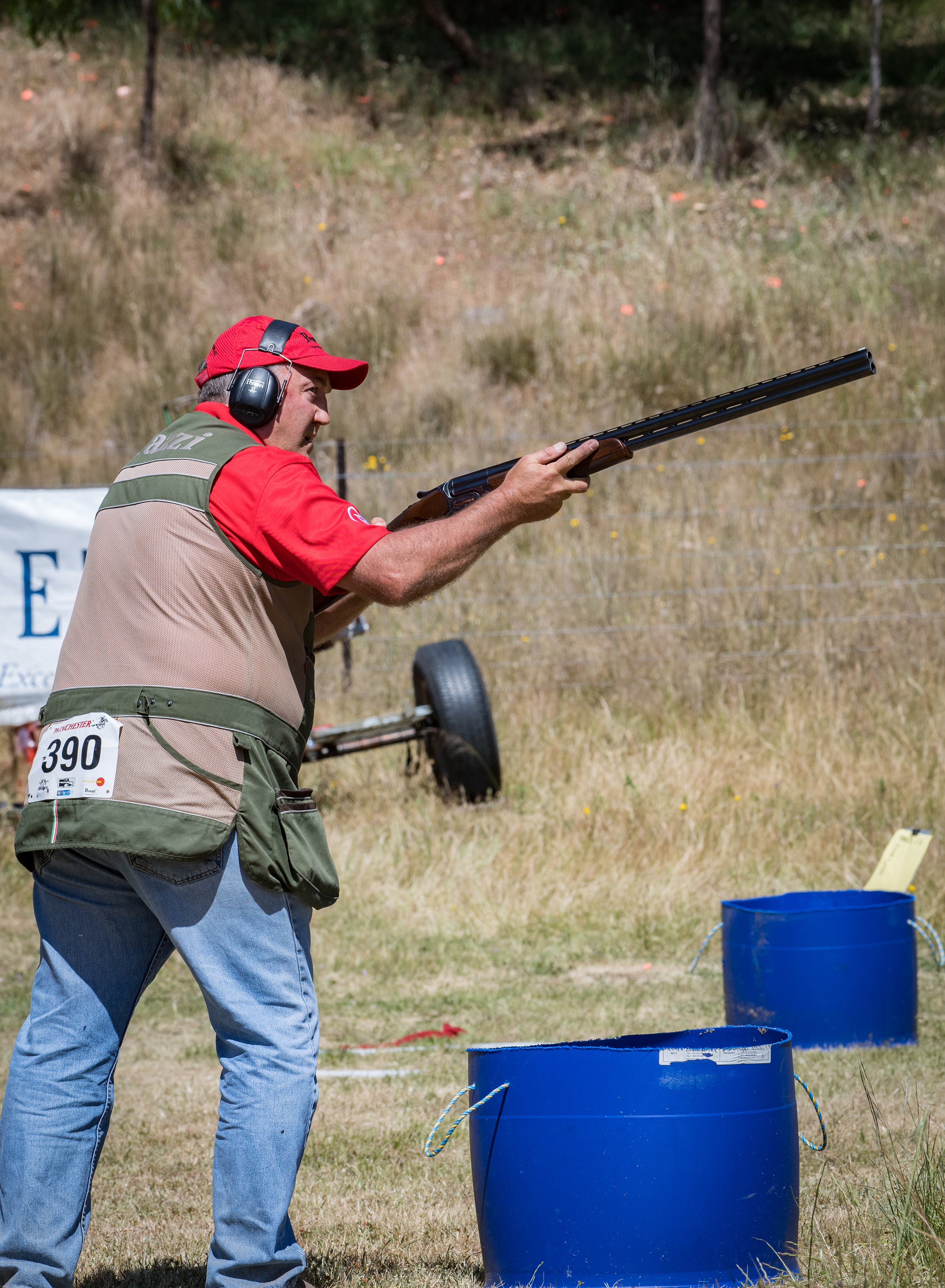 John got his shoot back on track before striking the curse of the rabbit.

“I still had the pair to go and I got the first bird, which was a pretty tough one, but the rabbit bounced clean over the shot again and the whole squad has gone ‘you’re joking’; we couldn’t believe it, I was gutted.

“I have a guy who comes in and shoots rabbits on my place. I don’t even shoot them. It is just one of those things, I thought that had cost me the shoot.”

After a tough year where he’s often been in contention but hasn’t finished off shoots, John said his fourth title gave him confidence he’s working his way through the problem.

He was also full of praise for his shoot-off opponent. 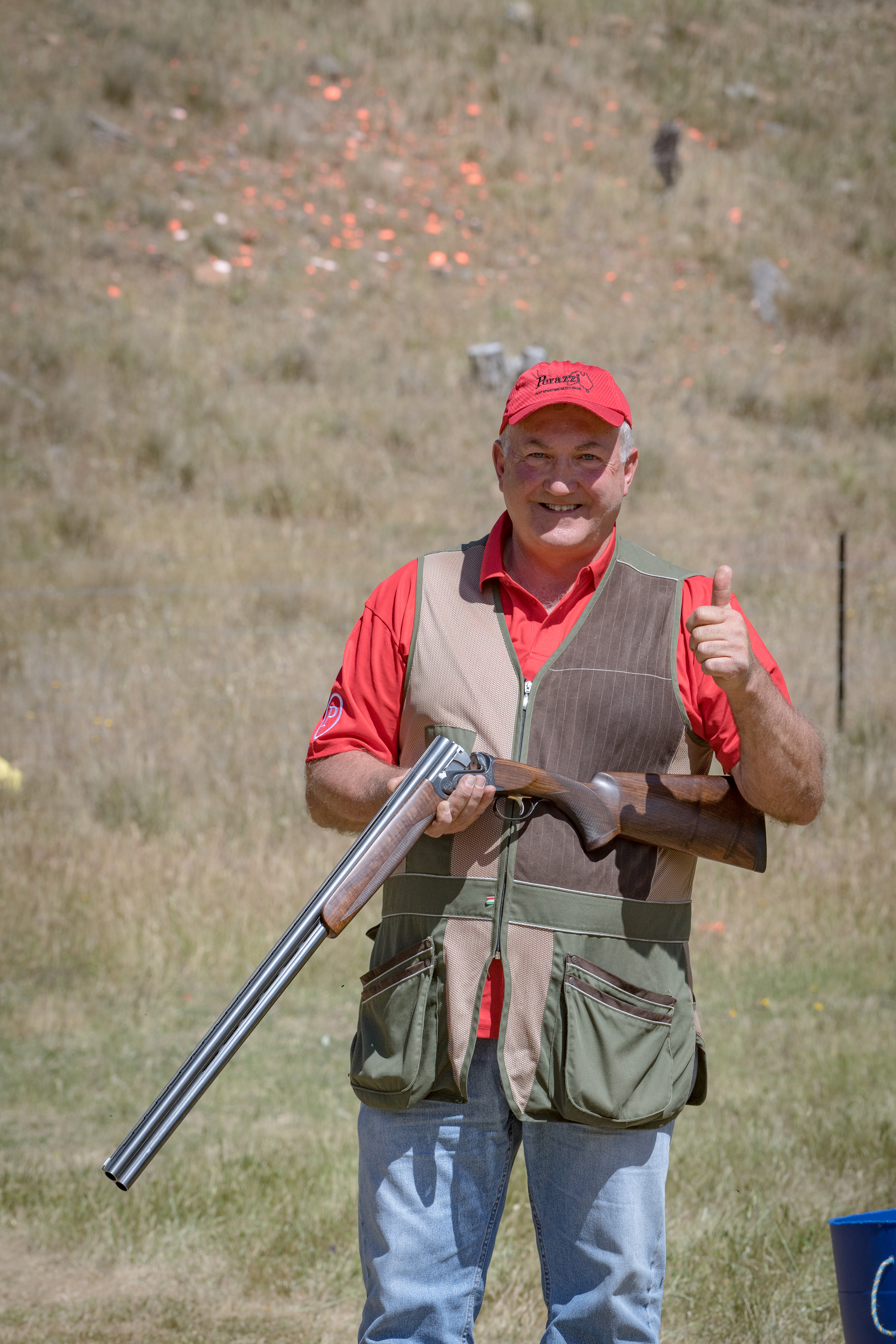 “The change of format didn’t change my approach; you just have to go and shoot as many as you can and tally them up at the end of the day. Brenton had to shoot 25 to equal me and I knew that; it was a fine effort to get into the shoot off,” he said.

Others, including 2016 champion Robert Hall, were full of praise for the shooter who seems forever young.

“He’s by far the best shooter we’ve had in this country, he’s a machine,” Robert said.

“He seems to be shooting better and better as he gets older, you have to take your hat off to him,” Brenton said.

The runner-up was shooting his first National Carnival since returning from the United States and admitted that in the lead-up, Simulated Field did not feel very familiar.

“I really had to work pretty hard over the last month to get my gun mount back,” he said.

“I hadn’t looked at the scoreboard but I’ve been around long enough to know that when a lot of people are watching you can’t miss,” he said.

“It is one target after the next and every target is as important as the last one until they are all broken.”

Neil Smyth While out walking the trusty beagle a couple of years back I came across this northern visitor on our local lake in the eastern suburbs of Melbourne. The Dandenong Ranges in the background as verification. He only stayed the one day...

An unpredictable video diary from lockdown

Field & Game Australia launched Hunters United Around The World to show our support for other organisations, businesses and individuals around the world. A very different world could emerge from this COVID-19 pandemic and we want to keep you up...

This event has been cancelled 100 ASF OTG